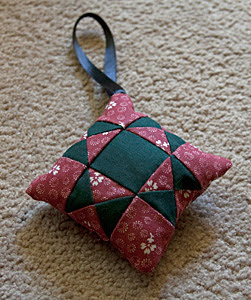 I have been going through my storage bins of old quilt projects to try to finish them up and make some space in my too-small-for-all-these-hobbies apartment. I had a few small blocks from a sampler quilt I started ages ago while I was first learning and then stalled on so instead of finishing the original project, I decided to just do things with the pieces I already had. The first thing I did was sew the log cabin blocks that I did by paper piecing into a miniature quilt, which you can see in its almost finished state here. A few weeks ago I did the machine sewing for the binding, but it is still waiting for the hand stitching to finish it up.

Of the remaining pieces, I had five blocks of an Ohio star design that I was trying to figure out what to do with when I thought that ornaments might be a good idea - especially since I have way too much fiber-fill around too. So I tossed the block that had some wonky alignment and made two ornaments out of the other four, a photo of which you see above. The colors are dark red and green, so they are good for Christmas, but I have them hanging on a peg board in my living room right now anyway. 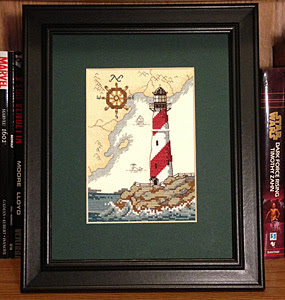 The other thing I did was to finally frame this old lighthouse cross stitch that I finished stitching ages ago (see previous mention here) but has been sitting in my "to be framed" pile ever since. One down... a gazillion more to go. For now it's on one of my bookshelves, but it may end up on the wall eventually.

That's it for this weekend. I might be able to get a little more done over the long weekend coming up for the 4th of July, but as always, we'll see!

What a great idea to make these little quilted ornaments out of the blocks. The framed lighthouse looks great!

Thanks! It feels so good to finally get some of these old projects finished!