What did I manage to stitch in August?

Not as much as I would have liked, as it turns out. But I knew that would probably be the case since I was planning to go back to the office most days so I could get back into that groove after working from home for so long. I'm still working from home on Fridays and I hope to keep that going as much as possible, but I know the more "normal" things get back to, the less often I'll be able to make that work.

No FFOs this month but I do have a stitching finish! I started Cosmos by SonvaStitch on 16ct opalescent aida by BeStitchMe at the very end of July and finished it three weeks later - and that was with a crunch in my stitching time. When I saw this design I had an idea of the fabric that I wanted to stitch it on and I had seen some good space-like fabric around and this is the one I ended up with. I don't stitch on aida a whole lot anymore but I saw the note on the website that the darker colors dye better on aida, so that's why I went with it. This is all in DMC and two threads on the cross stitches. I probably should have used three on Voyager, but I really don't like stitching with three threads! I did try something a little different on the "Wanderers" lettering though that seemed to help a lot. I had been wanting to try running a single thread up through the middle of the lines of stitching to see if that would fill out stitching that looked a little sparse and it worked! I only did it on the "Wanderers" letters since that's where the coverage issue really showed the most.

Not a ton of progress on the WIPs this month since I concentrated on finishing Cosmos, but I did keep up with Temperature Tree. I still didn't get to the colors above 101F in August, which is kind of astonishing. But just as I posted the update on Instagram with the note that I know better than to say I don't expect to use the higher temp colors for the rest of the year, the Texas weather proved why because we hit 102F! So I'll get to use one other color at the high end when I catch up next weekend. I think I can actually safely say that I won't use any of the hotter colors above that (reds) though since the odds really are good that we won't hit 106F or higher - at least I hope not!! 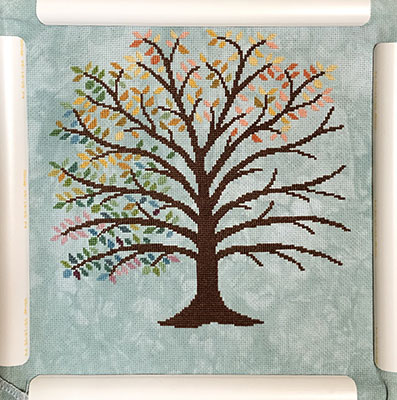 And I did manage a little bit of work on Sleepy Hollow! Not a whole lot - for some reason this is NOT a fast stitch for me - but at least it's a little progress after it was sitting around untouched for so long. Sorry for the moiré pattern on the thumbnail here!

I picked up the Mill Hill pizza slice again yesterday so I'm going to try to get that finished before doing more work on Sleepy Hollow. I might also do some more work on and older Mill Hill that I've been stitching on and off for a while now. It's one of their bigger (6" x 6", I think?) kits and it's very detailed and is taking a lot more time than the smaller ones do.