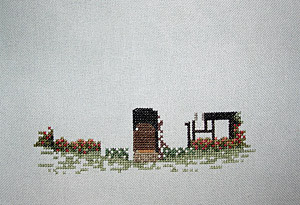 Here's the first picture of an old kit that I'm finally stitching. I picked up four Cross My Heart cottage kits AGES ago and I'm just now starting to stitch them (well, this one at least). I switched the fabric out with a hand-dyed Silkweaver fabric that is very subtle and is a light blue/gray color (I had to use the flash on the camera so it's a little washed out).

I really like the Cross My Heart designs, but I really hate hand-lettered charts! There are some nice details around the windows, but the chart is really hard to read because of the partial stitches and backstitching lines. I'm stitching the whole stitches right now and then I'm going to blow up the chart around the harder to read areas and see if it gets any easier to see.
Posted by Lara at 9:48 AM No comments:
Labels: Cottages

Some finishing from last weekend

I got a bee in my bonnet last weekend and finally did some finishing of projects that the stitching was completed on ages ago (in some cases, over five years ago!)

First up are two Christmas ornaments from previous Just Cross Stitch ornament issues, both with some awkward shapes. I didn't want to just do a regular square or round ornament, so these were experiments with some different shapes. 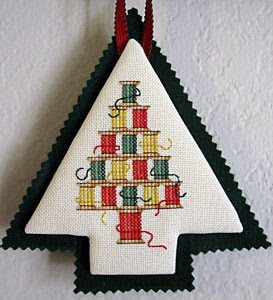 Doing the corners at the bottom was very tricky on this one! It's hard to tell from the picture, but the felt backing is dark green. 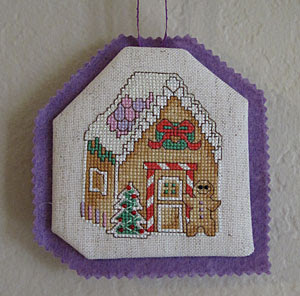 Annoyingly, this one ended up crooked on its backing, but I'm still fairly happy with it overall.

Next is the Hedwig Four-Patch freebie that came out with the release of the last Harry Potter book. So, of course, I took a photo of it on my Harry Potter shelf! 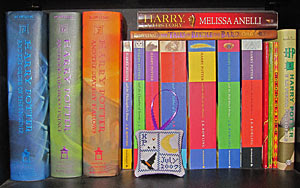 This one is finished as a stuffed ornament. I think this was the first time I have done a stuffed finish with a ribbon hanger, which was a little tricky, but it came out well.

The next is a framed finish of The Mary Rose, stitched from a kit that I picked up when I visited the museum in 2000. 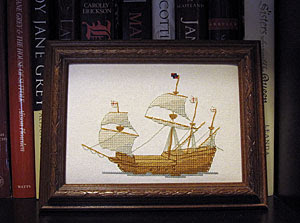 The photo for this one was taken on one of the many shelves of Tudor history books in my apartment.

And finally, I pulled an old needlepoint kit out of the frame it was in and finished it into a small pillow. I still want to add a trim around it, but I don't have one on hand that I like so I'll have to that some other day. 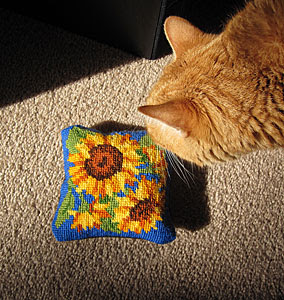 I was looking for some decent light to take a picture in, and of course the second I set it on the floor one of the cats decided she had to investigate.
Posted by Lara at 12:46 PM No comments:
Labels: Christmas, England, Geeky, Needlepoint, Tudors

Catherine of Aragon is finished!

It took about three years of off-and-on stitching, but I made the final push and finished the patterned underskirt last night. 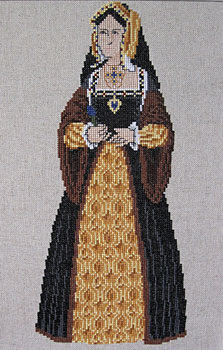 I have a couple of medium-sized projects that I've started, and I'm thinking that my next big project (once I get some more large q-snaps) will be a cute whimsical fairy cottage kit that I bought a month or two ago. I'm substituting a sparkly Silkweaver fabric for what came with the kit. I also have a bookmark kit that I started... too many projects going, as usual! I have also been playing around with some finishing of older small projects, including taking an old needlepoint that used to be in a frame and making a little pillow out of it. I really need to get some of these old projects finished up into ornaments, flat folds or framed, etc. and get them out of my "to be finished" basket!

Updated to add: I think part of the reason I was able to *finally* finish this project was that I have *finally* managed to put together a good stitching spot after buying a folding table. I initially bought it to make a sewing table (I bought an extender for my machine since I don't have one of those in-set sewing cabinets) but I also discovered that it works well with my needlework tabletop/lap frame. I had been trying to set up the frame on my computer desk, but it was a little too tall, the light wasn't as good and got in the way of me using the computer. :) So, I now set up my new table to the side and can spin between the computer (often with a podcast or Hulu running) and my stitching. I also stitch in bed sometimes, but now that I have two cats instead of just one, that has proven to be a little more difficult!

And updated again: I meant to mention that I have the other 5 of Henry's wives in the queue to do one of these days, but I'm going to work on a few other projects before I start on Anne Boleyn
Posted by Lara at 6:16 PM 1 comment:
Labels: Catherine of Aragon, Tudors
Newer Posts Older Posts Home
Subscribe to: Posts (Atom)