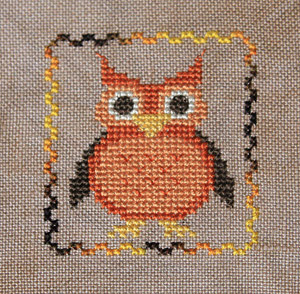 I managed to squeeze in another quick finish before heading back to work tomorrow! This is another one from the 2011 JCS Halloween ornaments issue. I used DMC for the stitching except the border, which is a Weeks Dye Works thread that I had bought for another design that I thought would look cute here (and the colors did match great!). I still have two more designs from that issue in the works, but I have no idea when I'm going to get around to finishing them since I have a feeling this is going to be a fairly busy summer, at least through July. I'm really hoping for a calm August since it's usually so hot outside that it's a good time to sit inside and stitch!
Posted by Lara at 12:21 PM No comments:
Labels: Autumn, Halloween 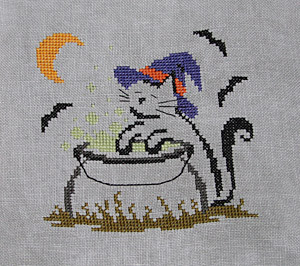 I usually take a little time off between semesters which is a chance to catch up on movies, books, and stitching! This design had been on my lapstand for a while now and sitting there taunting me and making me feel guilty for not getting any stitching done this year (although I knew going in that this was going to be a busy year - and I wasn't wrong). So I was glad to finally finish it up. I used DMC floss and I wish I had chosen a slightly darker green for the "potion" so it would show up on the gray fabric a little better, but too late now.

I have a habit of occasionally pulling out all of my WIPs and putting them on my craft table just to see how many projects I've got in various stages of completion (not including things that need to be framed or made into ornaments) and this round was kind of sobering. I have A LOT of WIPs - although not as many as when I first started stitching and put about a dozen stitches into about 20+ projects and then left them in a box under my bed for 10 years (I tossed a lot of those after a point since they were all on Aida cloth and I now prefer linen/evenweave). So I'm making a pact with myself to not start any new projects until I finish at least three of the current unfinished ones. We'll see how long that holds up when this year's JCS Halloween ornaments issue shows up at the end of the summer. ;)
Posted by Lara at 3:33 PM No comments:
Labels: Halloween
Newer Posts Older Posts Home
Subscribe to: Posts (Atom)