I didn't do a ton of stitching since the last post but I did do enough to post an update! And, oh the irony, part of the reason that I didn't do as much stitching as I would have liked is that I finally (after much, much resistance) fell down the FlossTube rabbit hole. Although I doubt anyone who would take the time to read this blog doesn't already know what FlossTube is, I'll explain it anyway. Basically, it's stitchers making videos about what they stitch. Some do stitch-alongs, some throw in tutorials (very helpful, even for someone like me who has been stitching for 30 years), some also quilt, or knit, etc. And anyone who knows me knows that it's only a matter of time until I start doing my own! I've actually already snagged "Lara's Loose Threads" as a channel name just in case. :)

Which also reminds me... the 13th anniverary of this blog is in a couple of days! It's interesting how stitching blogs were all the rage for a while but kind of trailed off and now it looks like FlossTube is the newer version of the same thing. I've been in various stitching-based online social communities for about 25 years now so it's been interesting to see how the come and go. The first one I was on was the rec.crafts.textiles.needlework USENET newsgroup and some of us in central Texas started our own subcommunity from there and did stuff in person. And I actually just discovered that RCTN actually still exists on Google groups after they absorbed the old USENET groups - tempted to rejoin but I really don't need another thing to keep up with! Interestingly, they have all the archives so I can actually go back and look at some of my old posts from the 90s - what a trip down memory lane! I eventually dropped off the newsgroup and my in-person group, but in the mid-2000s I started reading stitching and quilting blogs pretty regularly and, of course, started my own. As my stitching time waned, I fell off blogging, as did a lot of the stitchers I followed. And then a got a wild hair to start following the r/CrossStitch subreddit a year or two ago and recently joined a cross stitch Discord. So yeah, FlossTube was pretty much inevitable. But at least they are all encouraging me to do more stitching! (and blogging about it!)

The next-to-last section of the Wonders of Space SAL was posted last week and I've already stitched it, so I've been pretty good at keeping up with that project which is kind of encouraging me to try another one in 2021. I've been leaning towards doing one of the patterns were you stitch a little something every day that is coded to the high temperature for the day. I've seen some people do blocks in a calendar, another one did little flowers in rows, but right now I'm leaning towards the Temperature Tree with different colored leaves by StitchinMommy on Etsy. 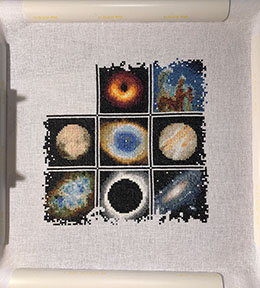 The other main thing I've been stitching on is this lighthouse that I found on Etsy. In my quest to use up some of the small cuts of fabric still in my stash, I knew I needed a lighthouse for this fabric, so I found this one and have made a fair bit of progress on it. It's been a while since I've stitched on linen (as oppposed to evenweave) and I've gotten a little sloppy with my stitches which seems to show up more on linen. Oh well... it's not like I'm going for the blue ribbon at the fair or anything. I really wanted to finish this during the summer but the Halloween and autumn stuff is pulling at me SO HARD right now.

And I finally got around to purchasing a replacement for the cottage that I talked about here that went missing from my office a few years ago! Yay eBay! I've prepped it for stitching by sorting and labeling the floss and rinsing and ironing the fabric and putting some fray-check on the edges, so this might become an WIP soon. 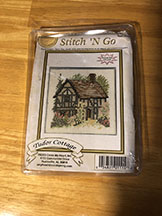 That's it for now! If (when?) I start doing FlossTube videos, I'll post about it for the one or two people who may still stumble across and read this blog. Happy Stitching!