Since I'm supposed to be finishing my Tudor podcast right now and I'm procrastinating, I figured I would post a few of the Tudor-related Textile Heritage kits that I've stitched. 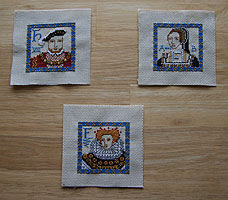 First is the "family" of Henry VIII, Anne Boleyn and Elizabeth I. The kits are supposed to be cards, but I'm planning on framing them together. 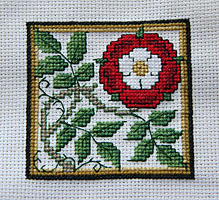 And these two are Tudor roses. I haven't finished bookmark yet, because I've been trying to decide whether or not to use the ribbon backing that came with the kit or to put some nice fabric on the back. The coaster is all finished and sits on my bedside table. (I took the picture before I put it in the plastic so there wouldn't be any reflections.)
Posted by Lara at 3:08 PM No comments:
Labels: Anne Boleyn, Elizabeth I, Henry VIII, Tudors

My largest project to date

... and probably still my favorite. 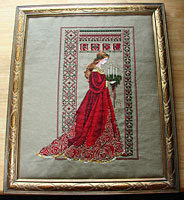 Sorry for the not-so-great picture. This obviously isn't a professional framing job either. I bought the frame before I finished (maybe even before I actually started) this design, but when I saw it in the store I knew it would be perfect. I did a temporary framing job on it a few years ago so I could have it up for Christmas and I still haven't taken it in to get it done professionally. Someday!

The design is, of course, Celtic Christmas from Told in a Garden. It's still the largest project that I've done, and it was my first large linen project. I think I had only done two very small linen projects before tackling this one.
Posted by Lara at 12:22 PM 1 comment:
Labels: Christmas

And I really don't have any excuse on this first one, since I have the perfect frame. I just need to get off my butt and mount the darn thing.

This is a Welsh dragon that I bought as a kit from Cambriana Designs, who have a whole line of Welsh symbols, castles and scenery pictures.

This is the frame for the dragon. I was thrilled to find it, since it looks like it's covered in scales!

I have a goal of stitching pictures of most of the places I've visited in the UK, so I was really pleased that Cambriana had a design of Criccieth Castle, which is certainly not one of the better known castles in North Wales (being overshadowed by the big Edwardian Castles like Harlech, Caernarfon, etc.) That is stitched up below: 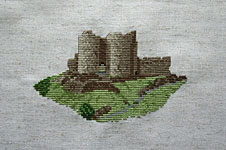 In both of these, I switched out the kit fabric for choices of my own. The dragon is on 28-ct mushroom Monaco and the castle is a natural (kind of linen-like) 28-ct that I bought a full yard of a couple of years ago. I really like this fabric since it adds a nice rustic look to pictures of crumbling old castles.

And one more for today's post: This is another kit I bought in the UK, this time down in Portsmouth, England and it is of Henry VIII's ship The Mary Rose

I thought this one would be appropriate to add since yesterday was the 25th anniversary of the raising of the ship. If you're ever in the south of England I highly recommend a visit to Portsmouth and The Mary Rose (you can see the HMS Victory there too!)
Posted by Lara at 1:56 PM No comments:
Labels: Castles, Dragons, England, Tudors, Wales

I finally found some cute little bows to finish off the bottoms of this set of ornaments that I've posted before. So these are ready to hang now!

This next one is still not completely finished, but it is one step closer to being a completed project. The pattern is from an issue of New Stitches (pretty sure). I had this old green aida cloth and wanted to see how a light thread would look on a dark fabric, so I stitched this one up quick. I was originally just going to toss it, but I was was inspired by some of the finishes I've seen on other needlework blogs and stitched this into a little pillow. I'll probably wrap some cording around it and put a tassel at the bottom and make an ornament out of it.

The next two are some little kits that I picked up... The ribbon sachet was a kit that I bough during the short time that I was working at Hobby Lobby to make ends meet after college (the research job that I continued in after graduation was only part time). Ribbon embroidery was really taking off at the time and I wanted to try some. I finished the ribbon stitching fairly soon after buying the kit, but only made up the sachet a couple of weeks ago. I can't believe that I've had things sitting around that long!

This next one was another kit that I bought at some big-box craft store a few years back and was mostly stitched at the house of friends that my boyfriend was staying at until he found a house to buy. I spent most of the weekends there too and stitched this on some of the lazy evenings at their house. I love how seeing some of these older project have strong memory associations with where I stitched them.

Posted by Lara at 7:21 PM No comments:
Labels: Blackwork, Christmas

Some recent finishes and a couple of framed items

First up, a few older projects that I finally framed (!!):

This one is a Jane Greenoff design that I bought as a kit on one of my trips to Britain (probably the 1998 one, so that means it took me nearly 10 years to finish it!)

And this was another kit that I bought on a trip to the UK, this time north Wales. This is a small design of Conwy Castle that I bought at the castle giftshop. At least this one only took me 7 years to finish. If I remember correctly, I did most of the stitching on it on one of my trips to Maine.

Here are a couple more old cover kits from the mid-1990s that I finished up a few weeks ago. I think all of these are from Needlecraft magazine. The leaves one had some lettering that I left off, since I liked the design without them. The wreath and egg were punched card designs, which I had never done before. I like the results, but punching 6 strands through those holes can be a little hard on the fingers (actually 12 strands where they double up through the eye of the needle!).

And last but not least, here is my progress on the Winter section of the four seasons design. The photo was taken early on Saturday and I did a bunch of work on the upper pine needles yesterday (and I'm about to finish another snowflake this evening). I generally don't set monthly goals (since I know I mostly won't meet them) but I'm thinking I'll get this one finished by the end of October. I wanted to do a Halloween piece this month, but I'm trying to not have too many things going at once right now.

Where has the time gone???

You know, for all the physics and astronomy classes that I've had, I still have no real grasp on the concept of time. It still amazes me how you can look up and all of a sudden you're flipping the calendar over to October when you're sure you just got back from a July 4th cookout the day before.

I've been really busy over the past two weeks and it is only going to get worse until about Thanksgiving, but I've been jealousy guarding my evening and weekend "downtime" to so some stitching and finish up some old projects.

First up, a couple of recent finishes:

This one was sort of a finish of an old cover kit. The materials (including the lavender inside) were from a cover kit on Needlecraft Magazine (I think) in about 1994. It originally called for a little embroidery design of a lavender plant, but I decided to use this little lavender sprig from Needlecraft's September 2000 issue instead. To make it fit, I did it over one on 32 count fabric. I love to stitch small but I made a big mistake starting it on an evening that I had a terrible headache. It certainly didn't help any. The finished product is now residing in my underwear drawer. :)

And yes, the infamous (to me anyway) 15-years-in-the-making Christmas ornaments are finally done! I stitched the backing on and stuffed the remaining two over the weekend. Now I just need to actually put up a Christmas tree this year so I'll have somewhere to hang them (hopefully out of the reach of puppy and kitty!).

This is another recent finish. The stitching had been done for ages on this one, but I hadn't finished it into the little potpourri bag until a week or so ago. I have long since lost the potpourri that came with the kit (I think it was a Cross My Heart product that I picked up at the Spirit of Cross Stitch festival), so it is currently empty. I'll probably get something with a nice cinnamon smell for the holidays.

I've got a pile of large and small items that are still awaiting framing. Here's just a sampling: (I'll post more about some of the individual ones eventually... maybe when I finally get them framed!)

And finally, a little bit about a medium-sized part of a larger project I'm working on. This is the Fall section from the Dimensions leaflet pictured next to it:

Instead of working it as one large picture, I decided to do it as four separate ones. I'm planning on framing them separately as well, but arranging them on the wall like they are in the overall design. I'm currently stitching the Winter one, which is the largest project I have going at the moment. I'll post some pictures of my progress in the next few days. Pretty much everything else I've been doing is finishing the old projects above and working some Textile Heritage miniatures, which I'll also post a picture of soon. I'm about 60% of the way through their Tower Bridge miniature at the moment.
Posted by Lara at 3:04 PM No comments:
Labels: Autumn, Christmas, Four Seasons
Newer Posts Older Posts Home
Subscribe to: Posts (Atom)