I was shocked to see how long it had been since my last post when I went to write this post today! Of course that also means that I haven't been doing a lot of stitching lately, but hopefully I'll be able to get some more in for this new year.

Looking back on 2010, I did meet at least one goal and finished Halloween Fairy, although I still have one large project left that I need to finish (Catherine of Aragon) which will have to be a goal of 2011. I also want to start to make a dent in some of the old kits I still have around.

In lieu of recent stitching, here are two older projects that I was recently able to finally get some photos of. The first is, I think, the first "over one" on a small count (28 ct in this case) project that I did. It was originally a gift for my grandmother and now is at my dad's. The pattern was from a British magazine from the 1990s, but I don't know which one. 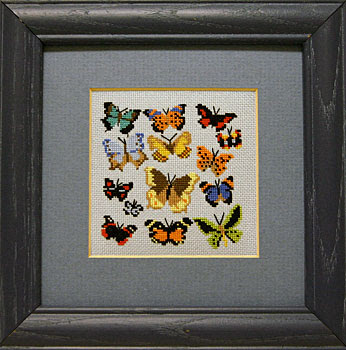 And the second is the largest needlepoint project I've ever done. It was from a kit and I probably stitched it at some point from the late 1990s to early 2000s. 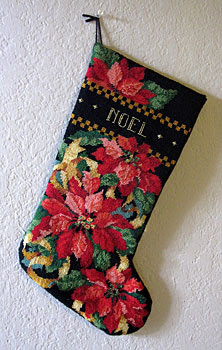 I'm almost done with the first of six kitty cat Christmas ornaments that I picked up last year and I think I'll set it aside after I finish the one I'm working on. I just hope they don't turn in to another set of "15 year ornaments" like the batch I finally finished a few years ago!
Posted by Lara at 6:02 PM
Labels: Butterflies, Christmas