Last weekend I got the bug to start doing some final finishing on some of the smaller designs I've stitched, which mostly meant that I ended up looking through all the craft store sales fliers and then wandering the aisles looking for inspiration. The ornament below is the only one that I ended up finishing over the weekend, and it didn't come out as good as some other ornaments that I did a couple of years ago. I think part of the problem was the oval shape and that I didn't clip the bunched-up fabric enough so the two halves didn't stick together very well (thankfully I had really thick cording to fill the gap). I was proud of myself for finding something to make the oval shape though - I was originally looking for an oval stencil in the art supplies, but didn't have any luck (they just had circles and they were really expensive). So I wandered over to the wood crafts and found an oval cut-out (for painting and putting on furniture, picture frames, etc.) that was just the right size and only 29 cents. Score! 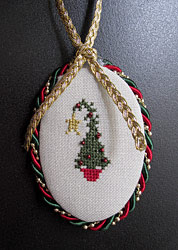 The design is from the Just Cross Stitch ornaments issue from a few years back. I've called it "Who Tree" because it makes me think of the trees in "How the Grinch Stole Christmas". :)

I did more on the remaining metallics on Halloween Fairy (which I will hopefully finish this weekend) and I started on a small ornament from this year's JCS Halloween issue. I like to have a small design that I can stitch on while I'm sitting in bed watching TV later in the evening and don't want to mess with a big design (even though I have a great lap frame). More pics this weekend!
Posted by Lara at 1:01 PM
Labels: Christmas