I didn't mean to go so long without posting an update, but Blogger and other things were conspiring against me!

First up is the Heritage Stitchcraft Dragon progress photo from about two weeks ago, after he gained a wing and a head: 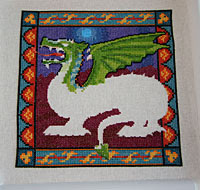 And here is a photo of the dragon from a day or two ago, with a lot more filled in: 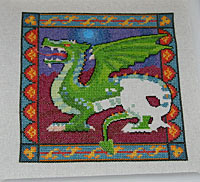 The flash went off on the second one, so it looks a little washed out. I don't know if I'll have a large amount of stitching time this weekend, but there is a chance I'll get the cross stitching finished. There is a fair amount of backstitching on the design, so that's going to take a little bit of time.

I also did this little cottage design during the past couple of weeks. It's originally from Needlecraft Magazine (Nov. 1996) as part of a set of six. I'm thinking about doing each of them separately on different fabrics and then framing them in little 2.5 inch square frames. The fabric I stitched this on was 30 or 32 ct. and was from a grab bag I bought a few years ago. I used DMC threads for this one, but I've been toying with the idea of doing it again with Anchor threads just to compare them, out of curiosity.
Posted by Lara at 12:06 PM
Labels: Cottages, Dragons, Heritage Stitchcraft Dragon